To share your memory on the wall of Roger Ludlum, sign in using one of the following options:

Roger married Patricia (Patsy) Hanna in July 1956. They had 33 wonderful years together before she passed away at the age of 58. They welcomed three children, Lisa (Larry), Karen and Steven (Linda). He was blessed with many grandchildren - Gregg (Jess), Larry, Annalis, Colin(Svetlana), Kelly (Ryan) and Shannon (Nikko). He also had 3 great grandchildren, Alexandra, Maximus, Leila and nieces and nephews, James (Jennifer), Bridget (Rob), Patrick, Jeffrey and Scott (Jill). He is also survived by his sister-in-law, Barbara (Malcom) McVean and his stepson, Douglas (Karen) Loftus.

He enjoyed a long career as a salesman for the James R Hanna Co in West Henrietta, NY selling highway equipment for many years. He then sold real estate for Margaret Mack Real Estate.
Roger, Patsy and family built a lifetime of friendships with their special neighbors on Park Place in Caledonia. Roger was an avid golfer, charter member of the Caledonia Country Club, and Invitational champion.

Roger married his second wife, Gladys Loftus and they enjoyed 26 years of marriage before she passed away in 2017.

Roger was a loving husband, father, grandfather and friend. He was always smiling, very outgoing and fun loving. He will be sadly missed by all that knew him.

Donations may be made in his honor to the Caledonia Library, 3108 Main St., Caledonia, a cause his family supports.

There will be no calling hours. A graveside service will be held at a later date at the family's convenience. We will announce that date here on this site.
Read Less

We encourage you to share your most beloved memories of Roger here, so that the family and other loved ones can always see it. You can upload cherished photographs, or share your favorite stories, and can even comment on those shared by others.

Posted Apr 12, 2021 at 04:51pm
Roger was such a great guy! He helped us find our house in Chili after driving us all over Monroe, Livingston, Ontario and Wayne county to find it! He had a great sense of humor and was such a loving dad and husband. He will be greatly missed. Our prayers for all of your family. May he rest in peace.

Posted Apr 11, 2021 at 08:08pm
As a child I remember Roger coming to our home. My mother was his aunt (his father’s sister). He was wearing his Army uniform and I remember him playing ping pong with us. Years later I was at Caledonia Country Club and watched him play in the invitational.
Comment Share
Share via: 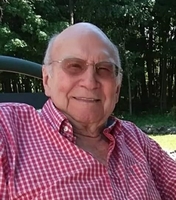