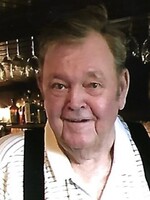 Don was the 5th child in a family of 11. He was in the U.S. Marine Corp, the Caledonia Fire Department, and a lifetime member of the Northwoods Sportsman’ s Club, and an avid Euchre player. He enjoyed farming and gardening. Don worked at Lapp Insulator and Kraft General Foods. He also delivered newspapers, cleaned beer taps for many bars and restaurants and was a groundskeeper.

All rights reserved. This obituary is also archived at obittree.com