To share your memory on the wall of Lawrence Reed, sign in using one of the following options:

Print
On Wednesday, March 31st 2021, Lawrence “Larry” Reed passed away at the age of 76 after a long battle with Lewy Body Dementia.

Larry was born in Caledonia on May 4, 1944, the oldest child of Margaret (Tennent) and Charles Reed. Larr... Read More
On Wednesday, March 31st 2021, Lawrence “Larry” Reed passed away at the age of 76 after a long battle with Lewy Body Dementia.

Larry was born in Caledonia on May 4, 1944, the oldest child of Margaret (Tennent) and Charles Reed. Larry and his siblings had a wonderful childhood in Taylor, with fond memories of family baseball games on Sunday nights and helping out at the family farm on Sand Hill Road. He was the valedictorian of the Caledonia-Mumford class of 1962 and went on to be the first in his family to earn a college degree at the State University of New York at Buffalo. He met his wife Judy (Woodruff) Reed in Buffalo and they were married on September 2, 1967. Larry started his first teaching job at Leroy Central School less than a week after the wedding, taking over for his former classmate Mary Catherine Hamilton when she went on maternity leave, and he continued to teach seventh grade social studies in Leroy for over thirty years, retiring in 1999.

In addition to teaching, Larry coached many sports including football, basketball, and golf at Leroy, Caledonia-Mumford, and Churchville-Chili. He was inducted into the Leroy Sports Hall of Fame in 2018 in honor of his time as a golf coach. He started umpiring Little League games as a teenager, and eventually became a member and officer of the Genesee Valley Umpires Association. He was inducted into their Hall of Fame in 2014.

Larry spent many summers working as a park supervisor for the Caledonia Parks Department both at Hamilton and Washburn parks. Many Caledonia residents remember Larry’s teasing and wiffleball leagues at Washburn throughout the 1970s and 1980s.

Golfing was one of Larry’s passions and he was an early member of the Caledonia Country Club, eventually taking on a role as groundskeeper. He was a stalwart member of the Monday and Thursday night leagues, and golfed almost every Sunday morning with his regular group. He also bowled in multiple leagues at Cal Bowl and traveled to bowling tournaments around the region. Larry also served as an usher at St. Columba’s church for many years.

After losing Judy suddenly in 2005 after thirty-eight happy years of marriage, Larry was lucky enough to find a loving companion in Pamela Rowland. Together, they enjoyed watching Larry’s grandsons play sports for Caledonia, cheering on Larry’s beloved New York Yankees, and taking drives to find a good hot dog or ice cream stand.

Larry was preceded in death by his father, Charles, his mother, Margaret, and his wife, Judy. He is survived by his longtime loving companion, Pamela Rowland, his son Michael (Erin), his daughter Kim (Jim Durr), and his grandsons Maxwell Reed, Camden Reed, Liam Durr, and Emmett Durr. He is also survived by his siblings Maureen (Casey) Randall, Joyce (David) Eichenberger, and David (Lee) Reed, and many nieces and nephews, along with members of Judy’s and Pam’s families and numerous friends. Special thanks to Wendy Chapman and Kerry Prentice of Livingston County Hospice.

Due to COVID regulations, service and interment will be held privately. In lieu of flowers, donations may be sent to Patrick Place, 2006 Scottsville-Chili Road, Scottsville, NY 14546 or online at https://patrickplace.org/donate, or to the Stone Church Backpack Ministry at EP Stone Church, 3177 Church St, Caledonia, NY 14423 attn: Backpack Ministry.

The family will hold a celebration of Larry’s life for his family and friends this summer.
Read Less

We encourage you to share your most beloved memories of Lawrence here, so that the family and other loved ones can always see it. You can upload cherished photographs, or share your favorite stories, and can even comment on those shared by others.

Posted Apr 08, 2021 at 11:08am
I really learned a lot in Mr. Reed's 7th grade history class -- I remember many of his teachings to this day. His class really impacted my lifelong interest in American History. My condolences to the family -- I can personally empathize with how they surely must be feeling.
Comment Share
Share via:
BS

Posted Apr 04, 2021 at 11:50am
Mr. Reed was always kind to me and my friends . I never had him as a teacher but I did as a coach. He was a genuine good man. Passionate about his stewardship role in the lives of his students and players. You sensed it from him and it made you feel confident he was going to never steer you wrong; that he had your best interest at heart, and you wanted to do the work on the field for him. Only good memories of a great guy. Peace to you and all those you love Mr. Reed and Thank you !
Comment Share
Share via:
DE

Posted Apr 02, 2021 at 09:29pm
Larry and I were pals from Kindergarten- College in Buffalo. There are hundreds and hundreds of stories I could share with all.
Standing on the corner watching all the girls go by, and going to the Avon Diner every weekend. Solving life's problems
with the rest of the guys was always fun. (Dave Ely, Don Johnson, Chico Henry, Greg Connor, Gary Grant, Denny Eaton)
We always remained friends thru college and after. We always served on our Class Reunion committee--thru and including
our 50th. Larry was intelligent, honest, loyal and faithful. Living in North Carolina the past 43 years, it's been difficult to keep
up with Larry & Pam, but I have managed visiting them every time I took a trip north. Fish fries at the Iroquois were my
favorite thing to do with, Larry and other friends. This is tough to swallow! Best of luck to Pam, Maureen, Joyce and David.
Denny Eaton
Comment Share
Share via: 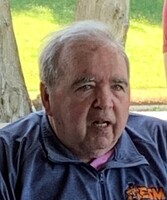 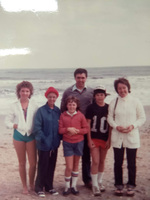 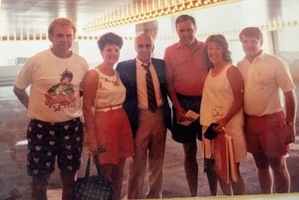 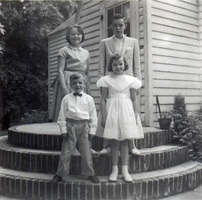