To share your memory on the wall of Ralph Myers, sign in using one of the following options:

On February 3rd, 2021, Ralph peacefully went to be with the Lord. Ralph was born on November 21st, 1954 in Dansville, NY to Ralph Gordon Myers and Stella Ruth (Mallaber) Myers. He was raised with his seven brothers and sisters on the family farm located in Tuscarora, NY. Ralph devoted his life to supporting his wife and daughter and settled down in Caledonia, NY He loved the outdoors and his hobbies included hunting, archery tournaments, camping, mowing lawns and landscaping, always bringing his only daughter alongside him. Ralph retired from Sabin Metal Corporation after decades of hard work. He was a lover of county music, especially Garth Brooks and dogs. He always said if he was president, everyone would own at least one dog. In the last years of his life he enjoyed spending his time with his three grand-daughters. Ralph was a very devoted father, Godfather and Grandfather and fought to spend as much time as possible with his family until the very end.

Friends and family may call Friday, February 12th from 5-8 pm. Ralph desired a gathering in celebration of his life instead of a funeral which will be held in the summer of 2021. Any donations can be made in his name to the ASPCA.
Read Less

We encourage you to share your most beloved memories of Ralph here, so that the family and other loved ones can always see it. You can upload cherished photographs, or share your favorite stories, and can even comment on those shared by others.

Posted Feb 07, 2021 at 02:25pm
Very sorry to hear of your loss. My wife Rose and I went to school with Doug and always considered him a friend. Great guy always up for some fun and always respectful to others. Lots of great memories with him.
We will keep all of you in our prayers
Mike Vasile and Rose (Bennett) Vasile
Comment Share
Share via:
MT

Posted Feb 06, 2021 at 04:29pm
Ralph and I were classmates Keshequa class of 73, we were both farm boys growing up knowing the value of hard work.I had the opportunity to spend the afternoon with him on there family farm, his Mom invited me in for a bite to eat, had my first mayonnaise and tomato sandwich that afternoon,liked them ever since.My sympathies to the family Ralph was a good man. MikeTallman
Comment Share
Share via: 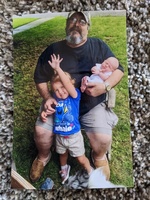