To share your memory on the wall of Ronald Blazejewski, sign in using one of the following options:

Ron’s life was a life of service. His entire career was in service to his country in both the US Air Force and Army. He flew fixed wing aircraft of all types, refueled fighter jets in the air and transported cargo and personnel all over the world. Ron also commanded Huey gunship helicopters in Vietnam often while taking enemy fire. He trained pilots, served in the reserves and ultimately retired as a full Colonel with multiple medals and awards. Ron was proud of his military service but rarely talked about it and he never bragged about his accomplishments although there were many. He was more interested in others than talking about himself.

Ron served his community. He was very active in the First Presbyterian Church of Caledonia serving in many capacities and always available when help was needed.
Ron was also very active in the American Legion, specifically the War Memorial of the Matthew Cleary Post. He marched in the Memorial Day parades, was the featured speaker and worked tirelessly behind the scenes at fundraisers and other events.

He enjoyed golf and was a long time member of the Caledonia Country Club.
His greatest legacy though was his service to his family. He was a loving and devoted husband. When he retired over 20 years ago, he made himself available to whoever needed his help. If Ron committed to doing something for you, you could check it off your list as being done. He was dependable, generous and a joy to be around. His life of service and love for his country, community, friends and family will be felt for generations to come. He had a wonderful sense of humor as well as every other quality that a human being can possibly have.

Whether you knew him as Ron, Dad, the Colonel, Blaze, Papa or Grandpa, you were blessed to have him in your life. May he rest in peace after a lifetime of service to others.

Family and friends are invited to his Graveside Service, 2 P.M. Tuesday, December 15, 2020 at Mumford Rural Cemetery, Flint Hill Rd., Mumford with full military honors. Due to the current COVID -19 restrictions his memorial service is planned for a future date.

In Lieu of Flowers memorials in Ron’s name may be made to First Presbyterian Church, 3080 Main Street Caledonia, NY 14423.
Read Less

We encourage you to share your most beloved memories of Ronald here, so that the family and other loved ones can always see it. You can upload cherished photographs, or share your favorite stories, and can even comment on those shared by others.

Posted Dec 15, 2020 at 06:33pm
To the Blazejewski Family I had the privilege of knowing Blaze through the 98th Division
As a fellow Viet Nam Vet we shared some stories. He was very modest about his experiences as a Huey pilot
He was very simply a Hero to me and those who knew him
That is the memory I will keep of him
Mike Dunlavey JD
MG USA(ret)
Senior Judge
Commonwealth of Pa
Comment Share
Share via:
SR

Posted Dec 15, 2020 at 08:55am
Ron was a remarkable soldier who made countless friends in his professional and social interactions.
His experience and advice was sought from service members of all ranks. A humble man and a gem of a
human being who we’ll all miss. Rest In Peace Ron
John Perrone
Comment Share
Share via:
MW

Posted Dec 15, 2020 at 08:55am
Dear Bev and family, I am so sorry for your loss of Ron. My prayers and sympathies are with you!
Marcia Wiesenberg.
Comment Share
Share via:
MU

We lost another great soldier and I am truly sorry, COL (R) Ronald T. Blazejewski. He was an outstanding Soldier, leader and person. He was instrumental in the 98th Division Color Guard and its many First Place National Championships. He was one of my mentors and a true friend. I worked with COL/Mr. Blaze in both his military and civilian careers. Like many of his fellow 98th Division Alumni’s, I too have many fond memories. He was liked and will be missed by all. To the family, be proud of the awesome legacy of COL Ron Blazejewski. 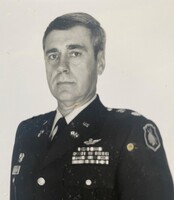